[I missed a post last week, so this is basically a combination of yesterday’s and tomorrow’s posts.] 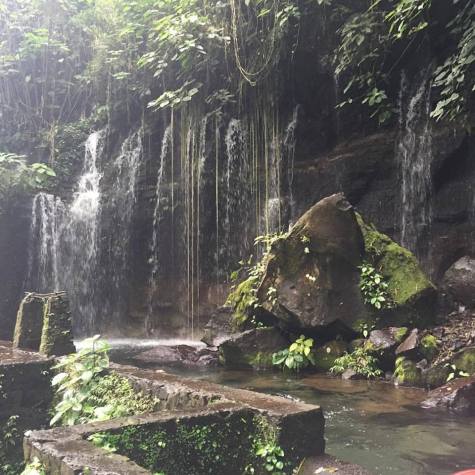 Yesterday I went to las cascadas de Juayua with some friends. We’re in the rainy season here in El Salvador, but if we wait for ideal conditions in life, we’ll sell ourselves woefully short. Thus, we plowed on and had a great time despite the rain. Unfortunately, the weather did prevent decent pictures. Still… 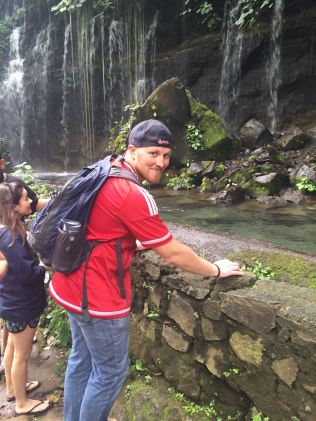 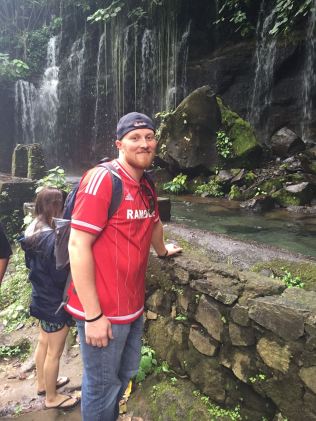 These waterfalls pour into crystal clear pools where one can relax and enjoy the surrounding environment (the jungle). I guess we couldn’t exactly relax too much since it was really cold, but we did have fun. Built alongside these pools are multiple tunnels leading to other pools. Though a little intimidating to plunge through a tunnel in the dark, it was a neat experience. We had a great time, and tried to stay dry, but most of our stuff got pretty wet. Afterwards we cleaned up as best as we could (I was directed to go inside this poorly lit house to change. As I walked in an old lady was moseying about and soon left. I changed quickly hoping she wouldn’t walk back in while I was stark naked!).

After the waterfalls we ate a delicious lunch and then visited Ataco (now my second time) to walk around and grab some coffee. There’s some really great wall art there! 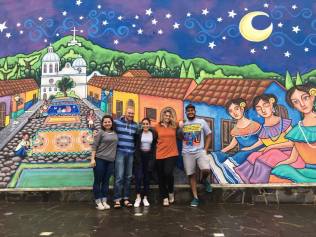 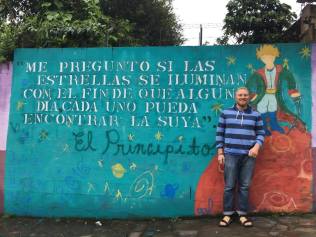 As you can see, there’s a painting dedicated to Antoine de Saint-Exupéry’s work, El Principito (originally in French, Le Petit Prince). This work is significant throughout the world, but it is especially significant in this region of El Salvador: Saint-Exupéry married Consuelo Suncín de Sandoval of El Salvador, and Ataco is near Sonsonate, the departamento where she grew up.

I started reading El Principito to work on my Spanish. Here are a couple favorite quotes so far:

Finally, I’m also reading Brennan Manning’s The Ragamuffin Gospel for the first time. In his fifth chapter, Manning goes into great detail to discuss the exchange of grace and wonder. This idea of wonder I think accurately relates to my experiences in El Salvador as well as to what I’ve read so far in El Principito.

The spirituality of wonder knows the world is changed with grace, that while sin and war, disease and death are terribly real, God’s loving presence and power in our midst are even more real.

In the grasp of wonder, I am surprised, I’m enraptured. It’s Moses before the burning bush “afraid to look at God” (Exodus 3:6). It’s Stephen about to be stoned: “I can see…the Son of man standing at the right hand of God” (Acts 7:56). It’s Michelangelo striking his sculptured Moses and commanding him, “Speak!” It’s Ignatius of Loyola in ecstasy as he eyes the sky at night, Teresa of Avila ravished by a rose. It’s doubting Thomas discovering his God in the wounds of Jesus, Mother Teresa spying the face of Christ in the tortured poor. It’s America thrilling to footsteps on the moon, a child casting his kite to the wind. It’s a mother looking with love at her newborn infant. It’s the wonder of a first kiss.

I’m learning to live with wonder in the moment. Thanks for sharing in part this journey with me.